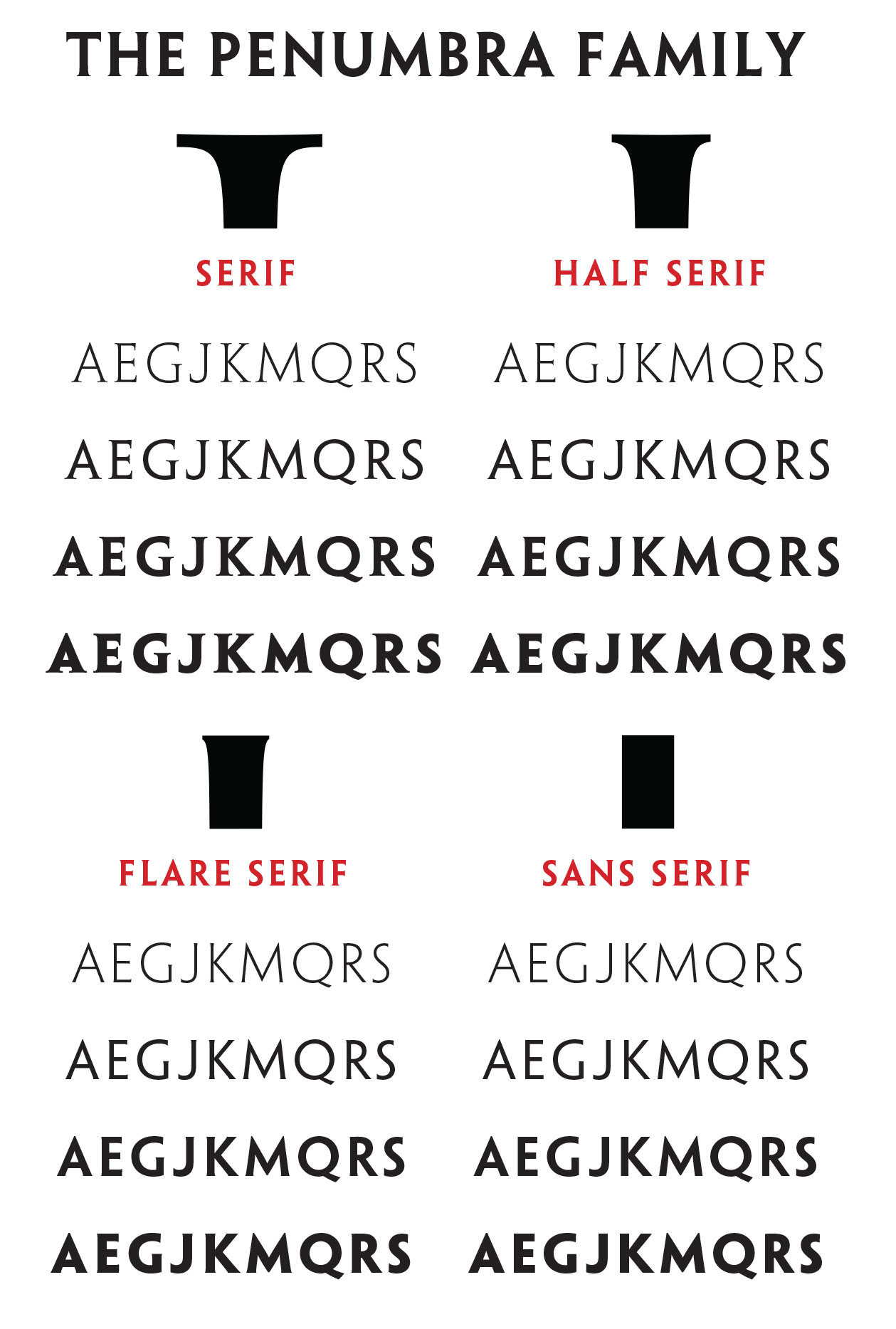 Adobe OpenType Penumbra, 2002, four fonts, each with Light, Regular, Semibold, and Bold. The Multiple Master version has been discontinued. 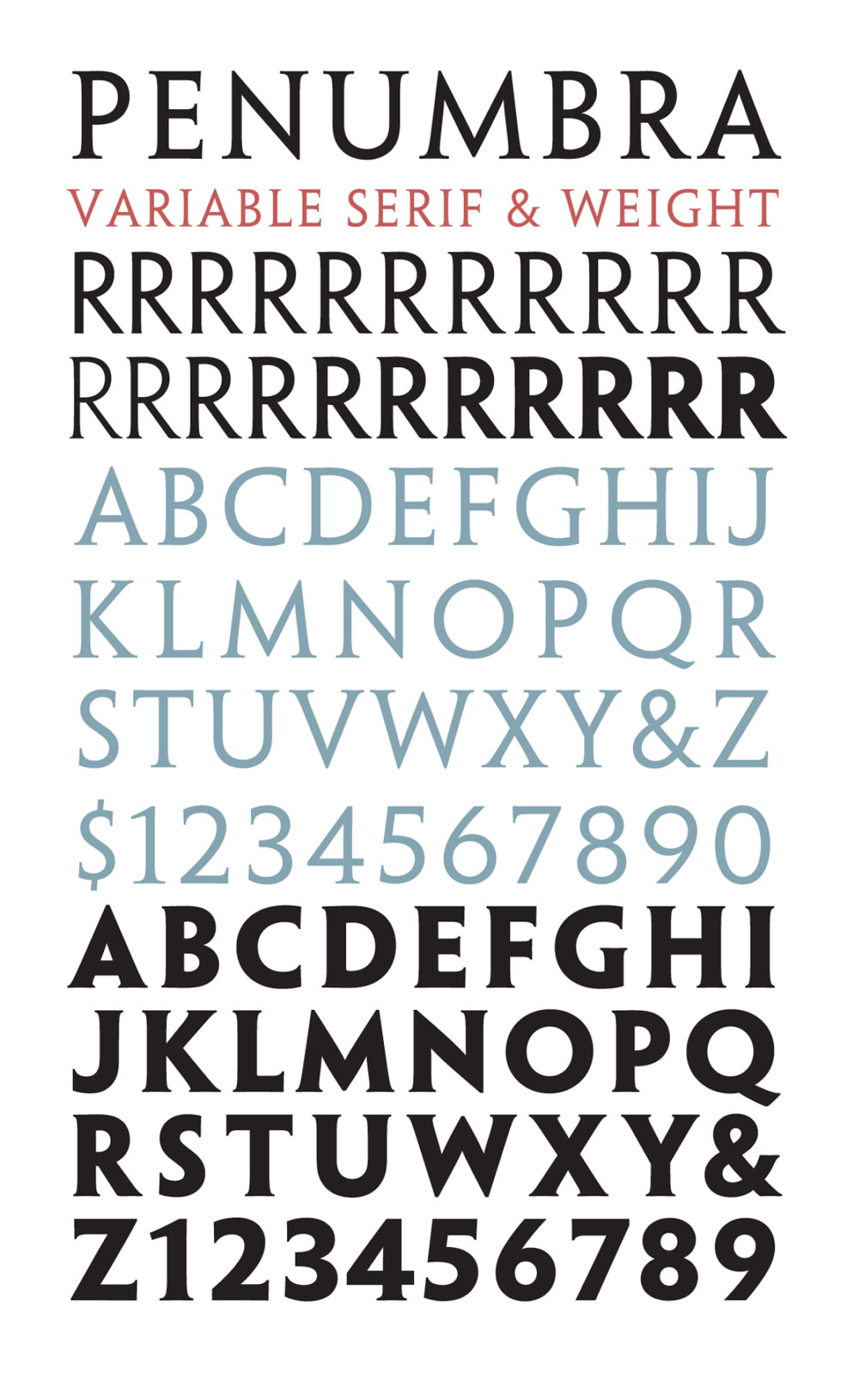 The typeface on the mentoring stamp is Penumbra, which I designed for Adobe Systems. Terry McCaﬀrey, director of stamp development for the USPS, told me that he thinks Mentoring a Child is the only U.S. stamp with art-work and typeface designed by the same individual. Of course, there are numerous stamps with lettering by the artist—which is often preferable to type. Although Penumbra is based on my large poster lettering, it is easy to read on tiny stamps.

The principle underlying this typeface design is a balance between traditional inscriptional letters from ancient Rome and Greece, of which Trajan is an example, and modernist, geometric types such as Futura, designed by Paul Renner in 1924–25.

Penumbra is one of the few serif designs with mono-weight strokes, a quality usually associated with sans serif letterforms that helps legibility in posters and small stamps. My technical assistant on the design was Gino Lee. We cut out samples of lettering from my posters and used them as a starting point for the design. As Gino transferred my designs into Fontographer, the type design software, we sent samples back to Adobe, where they were critiqued by Robert Slimbach and Carol Twombly, with help from Fred Brady and Jocelyn Bergen.

As Penumbra is a titling type, it has only uppercase letters. When issued, it was a Multiple Master (MM) design with two variables: serif and weight. One slider bar oﬀered 1001 variations from sans serif to full serif. The weight bar had 506 positions from light to bold, giving a generous 506,506 instances.

As computer software evolved, the engineers at Adobe reluctantly decided to abandon the Multiple Master technol-ogy and convert its entire type library to the new OpenType format. Penumbra was reissued in four fonts: Sans Serif, Flare Serif, Half Serif, and Serif. Each font has four weights: light, regular, semibold, and bold. This totals 16 variants, far fewer than in Penumbra MM. I hope that someday Adobe will issue Penumbra Expert with additional variations. In the meantime, it is possible to generate intermediate instances of the design by using interpolation or blend tools in vector applications such as Adobe Illustrator and Macromedia Freehand.

The new version of Penumbra has two important advantages that help compensate for the restricted number of variants. The OpenType format works across platforms, so it is no longer necessary to specify whether the font will be used on Macintosh or PC. I also requested that Adobe add the @ symbol to the character set, which was missing from the MM version—a considerable annoyance when setting e-mail addresses.

For further reading
Penumbra The Offsping of Trajan and Futura Excerpt from: The Eternal Letter: Two Millennia of the Classical Roman Capital, Edited by Paul Shaw, MIT Press, 2015